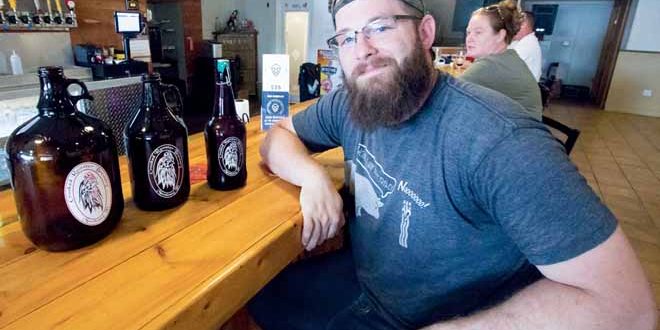 Jordan Wickizer of Macclenny (above) put three growler bottles on the bar at Crooked Rooster Brewery late Tuesday afternoon about a half-hour before the taproom and other bars and night clubs across Florida were ordered closed by Governor Ron DeSantis to combat the spread of the COVID-19 virus.

Mr. Wickizer, who wanted to fill up all three bottles with Ace Pineapple Cider, and a few dozen others were inside the bar on South Sixth Street before the start of the closure at 5 p.m.

Some like Mr. Wickizer said they knew about the impending closure and wanted to patronize the business while they still could. Others were celebrating St. Patrick’s Day.

“I can’t get it after five,” said Mr. Wickizer, who lives nearby and works at the state hospital. “My brother-in-law is at home so we’re sharing the goodness at the house. We love craft beer and this is my place.”

He said his three kids and several nieces and nephews spent the day playing outside “living their best life ... playing outside, playing in the garden.”

Pub owner Sarah Sheppard said her employees are looking for other work now due to the closure of the bar, but fortunately for Mr. Wickizer and other craft beer fans, she plans to continue selling growlers of beer for off-site consumption to comply with the governor’s order issued March 17.

She’s bracing for huge revenue losses in the coming weeks and said her rent is still due on April 1.

Restaurants were ordered to operate at 50 percent of usual capacity and keep tables at least 6 feet apart, which comes from guidance issued by the Centers for Disease Control. The CDC recommended Monday to limit gatherings to no more than 10 people and practice social distancing by staying 6 feet from everyone to slow the spread of the virus and limit its death toll.

Many local eateries were restricting orders to take-out or drive-threw only.

Schools and associated extracurricular activities have been canceled through April 15 by order of the governor and state testing was canceled for the school year. That also means schools will not be graded and graduation, grade promotion and course grades will be determined by other means.

The initial two-week hiatus for schools statewide would’ve replaced Spring Break in Baker County previously set for April, but additional two weeks were added to the closure Tuesday. School districts have been tasked with setting up remote learning programs online or with paper and pencil packets delivered to students.

“We’re planning for the worst but hoping for the best,” she said Monday afternoon. “We’re taking a deep breath and taking it one day at a time. We have a good group of level-headed people ... We’re going to make it happen.”

Schools were being disinfected on Tuesday, including an aerosol spray to disinfect the air and the cleaning of surfaces, floors and walls, said the district’s safety director David Crawford.

He said similar disinfection steps were taken several weeks ago during the evenings as part of routine flu-season cleaning.

County commissioners met Monday night to declare a local state of emergency, which led to the restricting of access to government buildings and some county parks to anyone who is not essential personnel or who must conduct business with the county in person.

Among the county facility closures are Shoals Park, Emily Taber library, the Ag Center and the fairgrounds.

Little League called off its activities through the end of the month but may extend the hiatus.

“I hate to cancel Little League but people can spread [COVID-19] and not even know they have it. ... I feel like we should be diligent,” said Commissioner Cathy Rhoden, echoing similar concerns shared by other commissioners during the board’s meeting March 16.

Despite the county facility closures, interim county manager Sara Little said in a memo to commissioners Tuesday that “all board of county commissioners offices and departments are open and fully operational ...”

Similarly, Macclenny city hall is asking that residents conduct business with city officials by phone, online or via the dropbox outside. The city canceled upcoming events at Heritage Park, save a private wedding set for this weekend. The tax collector’s office was urging the public to do business remotely there as well.

There wasn’t a lot of activity at school meal drive-thew locations at the middle school and Macclenny Elementary campuses Tuesday midday, but a few families picked up breakfast and lunches from coolers in the parking lots.

Late Tuesday Superintendent of Schools Sherrie Raulerson announced meals for the remainder of the week would be distributed on Wednesday. A third drive-threw pick-up location is at Baker County High School though there are two dozen sites in the county in all, many at churches, parks and community centers. See a full list at bakercountypress.com

“... There will be no deliveries of food on Thursday or Friday. Again, the meals for Thursday and Friday will be delivered tomorrow. The deliveries will begin again on Monday, March 23. On Monday, you will receive all the meals for your child that will provide for their lunch and breakfast Monday through Friday of next week,” she said by email. “You may go to your child’s school website, or the Baker County School District website to find the location of meal delivery in your area. There are many meal delivery sites throughout Baker County. The time of delivery in your area is also listed. Please be patient if the delivery van is late arriving. If you have any questions, please call 259-4330.”

Polling stations were active Tuesday as well with voters casting ballots in the Presidential primary for Florida.

The state department reported a local case in error Sunday night but that was quickly corrected by local officials confirming there was no such case here.

Some church services have been suspended, though many local houses of worship use social media to broadcast services live into homes.

Walmart and Winn-Dixie also changed their hours to close sooner daily for cleaning.

Winn-Dixie will close at 9 p.m. nightly until further notice, shows its Facebook page.

“This will allow our associates the time they need to appropriately restock our stores, and ensure our stores are able to conduct additional sanitation procedures in service of providing a shopping experience our customers can always count on,” the post reads. 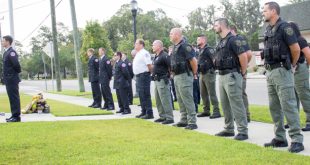